Beachfront homes in high demand despite slower market over winter

BEACHFRONT homes are in high demand with dozens selling in the past few months – a period when the property market generally tends to slow down.

A 1970s-built Bilinga home with 20m of beach frontage sold under the hammer for $3.3 million. About 50 people, including six registered bidders, attended the auction on Saturday 11 August.

“(Bidding) started at $2.5 million and it sold for $3.3 million,” said marketing agent Troy Dowker, of Ray White Mermaid Beach. It was one of several beachfront homes Mr Dowker has sold recently. Despite the property market generally going quiet over winter, he said beachfront properties between Palm Beach and Bilinga were in high demand lately.

“I sold six beachfronts last month,” he said.“I’ve never experienced the demand we’re getting now. This is the strongest winter I’ve seen.” According to realestate.com.au, five properties on the beachfront have sold so far this month.

Mr Dowker said people looking for more than just a house were driving demand for beachfront properties, which were consistently drawing big crowds at auction. The fact that there were limited beachfront blocks was also a factor, he said. “If you’ve got the money, you just invest in lifestyle,” Mr Dowker said. “Those people are aged between 45 and 70, most of them. (There’s) definitely a lot of strength in the beachfront market.” 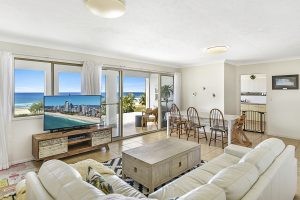 A Gold Coast family snapped up the Bilinga home on the weekend. Mr Dowker said they outbid several contenders from further north and interstate. He said they planned to demolish the existing property and rebuild. “It will be built as a family home,” he said.

The buyer, who firmly believed high-rises should be kept away from the coastline, told The Bulletin they would only build two-storeys to preserve the integrity of the beachfront. The existing home on the 489sq m site has two storeys and offers dual living.

Seller Josie Kay told The Bulletin last month her family renovated the brick building to transform it into a home. “It was basically a duplex before we bought the upstairs (level) in 2005,” she said. “We actually just bought upstairs and then downstairs became available. “We absolutely loved (upstairs) so we thought it was a good opportunity.” Read the original article as published on realestate.com.au here

The impact your garden could have on your sale price