FORMER Queensland Governor Leneen Forde has sold her Gold Coast property of 25 years under the hammer for a record price. 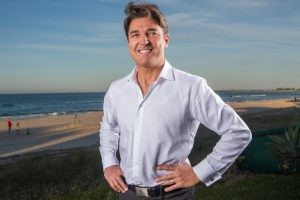 Member for Currumbin Jann Stuckey bought the beachfront home at 248 Pacific Parade, Bilinga, for $3.1 million at a packed on-site auction on Saturday morning. Ray White Mermaid Beach agent Troy Dowker said it marked a new record sale for the area. He said the former record was set by a property two doors down at 252 Pacific Parade, which sold for $2.45 million in 2004. “This is a record sale by about $700,000,” Mr Dowker said. “For this size block, it’s a record price by a long shot.” The bidding started at $1.5 million and sold in just 15 minutes in front of 200 spectators. “We had 14 registered bidders, I’d say about eight of them participated,” Mr Dowker said.

The two-storey house, which sits on a 478sqm block, was built in the 1980’s and is in original condition. It features spectacular views to Currumbin Alley rock, Burleigh Headland and the Surfers Paradise skyline. Mr Dowker said the home had generate a lot of interest, including from interstate, during its six week auction campaign. “This is my 15th year of selling real estate and it’s one of the strongest properties I’ve marketed,” Mr Dowker said. He said the property’s prime position and unique features were what made it so appealing to potential buyers. “The house is quite quirky, it’s a little bit different, a lot of people gravitated to that,” Mr Dowker said.

Mrs Forde said after the auction that it was the right time to sell her home. “This has been our home since the 1990s but I am getting older and the time has come to sell,” Ms Forde said. “It’s always been a happy home but I have a home in Brisbane to go to. “Most of my friends and all of my family are in Brisbane anyway so the time is right.”

She was happy for Ms Stuckey and was confident she would take good care of the property for years to come. “It could have been pulled down by a developer but the new buyer will move in and love it for the next 25 years,” Ms Forde said.