Gold Coast property sales are down, but its not all bad news

Fewer properties are changing hands across the Gold Coast despite house and unit prices rising slightly.

Latest data in the Real Estate Institute of Queensland Market Monitor reveals sale volumes across the board plunged in the December 2018 quarter.

It comes as the annual median house price jumped 1.4 per cent to reach a new high of $625,500 while the quarterly median for units and townhouses recorded a 0.6 per cent increase.

REIQ chief executive Antonia Mercorella said it was a sign the market had softened in the last three months of 2018 but there was still long-term confidence it would improve. “(House) sale volumes saw a substantial drop over the December 2018 quarter with 1070 transactions, a result that was down on the September 2018 number by 32 per cent,” she said.

“(Unit) sale volumes saw a substantial drop over the December 2018 quarter with 1427 transactions — a figure that was down on the September 2018 result … by 44 per cent.”

While the data looked concerning, REIQ Gold Coast zone chairman Andrew Henderson said it showed sales volumes had come back down to a “normal level”.
“The volumes have come down from an extremely high level,” he said.

“It’s a pretty good opportunity for people who have got the cash because banks are more stringent on their criteria,” he said.
He said cash buyers had more power come negotiation time because they could offer a higher price to beat competitors without having to consult the bank.

Strong migration and infrastructure as well as plenty of jobs was an advantage Mr Henderson said the Coast had over falling Melbourne and Sydney markets. 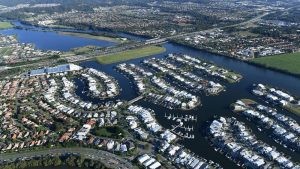 Ray White agent Matt Micallef said an increase in the number of buyers signing contracts with a “subject to sale” clause was also contributing to the drop in transactions and increased days on market.

He said of the properties he had sold this year, seven were subject to the sale of the home the buyer was living in.

“Cash sales used to be a very popular thing and we’ve only done one out of the (sales),” he said.

“It used to be quite a rarity subject to sale (contracts) but we’re definitely seeing it as more of a common circumstance at the moment.

Read the original article here as published on www.realestate.com.au