It was a quiet auction weekend on the Gold Coast but the market is expected to pick up now the Commonwealth Games are over.

CoreLogic auction market commentator Geoff White said the property market had gone quiet throughout the Games. He said business was affected across the board, with many retailers including cafe and restaurant owners reporting a downturn over the past two weeks. However, he was confident the market would return to “business as usual” now the event had wrapped up.

“(The market) has been affected by the Commonwealth Games, there’s not doubt about that,” Mr White said. “But that’s not a sign of things to come, I wouldn’t have thought.”

According to CoreLogic, there were 19 auctions over the weekend with seven recorded results, whether they be sold of passed-in.

This coming weekend, there are 37 properties set to go under the hammer on Saturday and another 54 on Sunday. Most of the properties scheduled to go to auction on Sunday are part of Ray White Queensland’s Gold Coast Auction Spectacular at Main Beach’s Sheraton Grand Mirage. 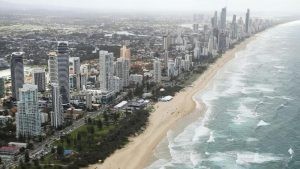